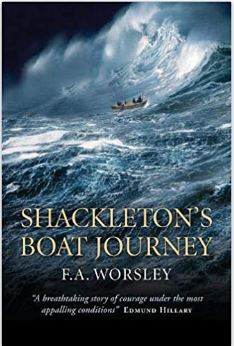 The centenary year of Sir Ernest Shackleton death is an ideal opportunity to reflect on both his achievements as a Polar explorer as well as his fine leadership qualities.

This short book recounts the tale of the 1914-18 Endurance expedition. It focuses on the extraordinary account of human survival that followed the destruction of the Endurance. Written by Frank Worsley, the ship’s skipper, it is an unofficial account thereby providing an objective view of “the Boss” and his remarkable leadership skills. It is written in a way that tells it as it was, whilst under playing his own staggering achievements.

Endurance was the ship that carried Shackleton and his men south in late 1914. Initially trapped and then crushed by the polar ice, the ship sunk even before the Polar party reached the Antarctic Continent, and before the attempt to cross Antarctica (through the South Pole) could even be considered.

What followed is one of the greatest survival stories of all time. The ship was beset in January 1915 and was finally crushed on 27th October; it sank a month later. Forced to make camp on the ice floes that destroyed their home, Shackleton and 27 men (11 scientists & 17 seamen), survived on rations rescued from the ship, plus whatever penguins and seals they hunted. As the Antarctic summer progressed the ice floes drifted 1,000 miles north, gradually breaking up, as rising temperatures melted the sea ice that kept them afloat. Contact with the outside world, anyway now at war, was impossible, and thus with no other option available the crew launched the three lifeboats, roped together for safety. Set adrift in the world’s most inhospitable sea, packed with killer whales and in sub-freezing conditions and using only a sextant and the stars to navigate, the group set sights on reaching Elephant Island, a small rocky outcrop some way off the South Shetlands.

After three days on the open sea battered by pack ice, head winds, frost-bite and freezing temperatures, the wind had sailed them rearward. They were further from their goal than when they had set off. Finally the wind direction changed and the boats made headway; after 80 hours without sleep “kept awake by the urgency of affairs”, Worsley navigated the boats directly onto Elephant Island. That night he recorded in his sodden diary “any mistake in my sights and 28 men would have sailed to their death.”

Although this was the first time the men had placed a foot on dry land for sixteen months, the island was no place of safety. After a short time spent recovering what strength they had left, Shackleton picked five men to accompany him on the next leg of this inconceivable journey. His target was South Georgia, 800 miles east, and the only civilisation there was any chance of reaching. Leaving the remainder under the leadership of Frank Wild, to survive in the boats upturned providing scant protection from the elements, the shore-men launched the rescue party back on the open sea, entrusting them with all hopes of survival. After another twenty days were spent at the mercy of the Southern Ocean, living in sleeping bags “on the point of fermentation”, the men sighted land. Once again Worsley had navigated the 22 foot boat through high seas, stormy weather and a “heavy accumulation of ice” to exactly the point he had been aiming for. But landing ashore became as dangerous a challenge as they had yet faced. A huge storm blew up; first it propelled them offshore before throwing them against “cliffs of destruction”. Finally ashore, but now on the wrong side of the island, they faced the test of crossing the island to reach Stromness, the Norwegian Whaling Station. With no map, carrying a small axe and some meagre rations, in clothes unchanged for 7 months, the men set off across the snow-capped mountain range topping 4,000 feet at is highest point. After 36 six hours they finally arrived “ragged, filthy, and evil smelling; hair and beards long and matted with soot and blubber; unwashed for 3 months, but fortunately with no vermin.”

It took four attempts and over 100 days for Shackleton to get back to Elephant Island and rescue his men, all of whom had survived. They had waited patiently in their miserable dwelling hoping against hope that they would be rescued. Within weeks many of them found themselves in the trenches of World War One, where some were not so fortunate.

This book tells a story of men who left a civilised world with limitless opportunities for the bold but returned to one where all hope had been destroyed. It is a story of heroic failure on a remarkable scale, but also of great leadership, perhaps the finest. Scott sacrificed his men in pursuit of a dream, whilst Shackleton put his men first – not a life was lost. His outstanding characteristics were the care and well-being of all his men.

It’s also timely to remind readers that earlier this year Endurance was discovered lying three miles below the Southern Ocean, perfectly preserved in a lifeless watery grave, 117 years after it sunk.

Watch this short clip of history brought back to life https://endurance22.org/endurance-is-found